To understand where and when water scarcity is likely to increase, the Willamette Water 2100 project team developed a computer model of human and natural controls on water supply and demand across the WRB. The model, called Willamette Envision, represents key aspects of the water cycle, from precipitation, evapotranspiration and streamflow, to reservoir operations, water rights and water withdrawals. The team used the model to explore connections and feedbacks between parts of the water system, and to anticipate how climate change, population growth and income growth might affect water scarcity in the 21st century. Below are key findings.

Finding 1: Water Scarcity in the Uplands

In the mountains that are the source area for water supply, climate change is the primary driver of water scarcity. Warmer conditions caused by climate change will reduce winter snowpack, stress forests, and increase wildfires by as much as ninefold.

The graph above shows projected temperature changes from a historical baseline (mean of 1950-2005) for the Willamette Basin. The red and orange shaded areas indicate the range of projections derived from 40 global climate simulations. While the amount of warming varies between models and global carbon emissions scenarios, all project a warming climate. For modeling in Willamette Water 2100, we selected three climate scenarios to span the range of climate projections for the basin. We used output from these three scenarios to drive watershed modeling in Willamette Envision, and explore the effect of a changing climate on the water system. The heavy pink and blue lines indicate the amount of warming in these three climate scenarios: low change (pink; called the LowClim Scenario) and moderate change (bright blue; called the Reference Scenario) and high change (dark blue; called the HighClim Scenario). For more information about climate change projections for the Willamette Basin, link to the Future Climate page on this website. 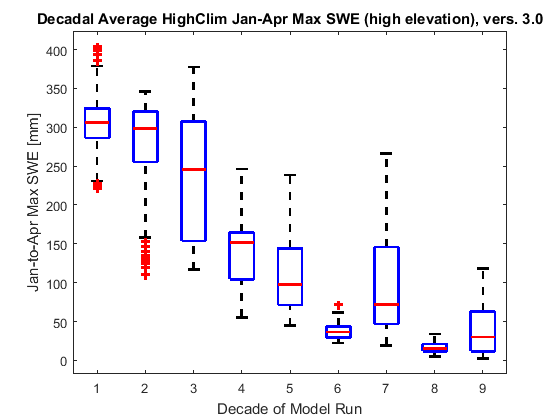 Modeling with Willamette Envision illustrates the sensitivity of snowpack to climate warming. The figure above shows the decline in maximum winter snow water equivalent (SWE), the amount of water stored as snow, for the WW2100 scenario with the most climate warming (the HighClim Scenario). Snowpack is a natural reservoir that stores a proportion of winter precipitation, and releases water into streams (and federal reservoirs) during the spring. To read more about snowpack modeling in Willamette Envision, link to the Snow page. You can also view an interactive map showing projected changes in maximum SWE for different WW2100 scenarios.

The maps above show the changes in forest composition simulated by Willamette Envision for the WW2100 scenario with the most climate warming (the HighClim Scenario). Stand replacing disturbances, either harvests or fire, induces a change in vegetation cover type. To read more about forest modeling in Willamette Envision, link to the Upland Forest Change page. You can also view an interactive version of this map.

Both loss of snowpack and changes in upland forests have the potential to affect water supply from Willamette Basin headwaters. The potential loss of snowpack has important implications for spring and early summer high elevation soil moisture, forest health, spring streamflow, and reservoir management. The projected increase in the risk of forest fire and resulting changes in water consumption by upland forests, highlight the need for management strategies to ensure healthy forests in a time of increasing moisture stress.

Finding 2: Water Scarcity in the Lowlands

In the Willamette valley where water is needed for farms, cities, and ecosystems, future scarcity depends predominantly on human factors such as population growth, land use practices, and water law. 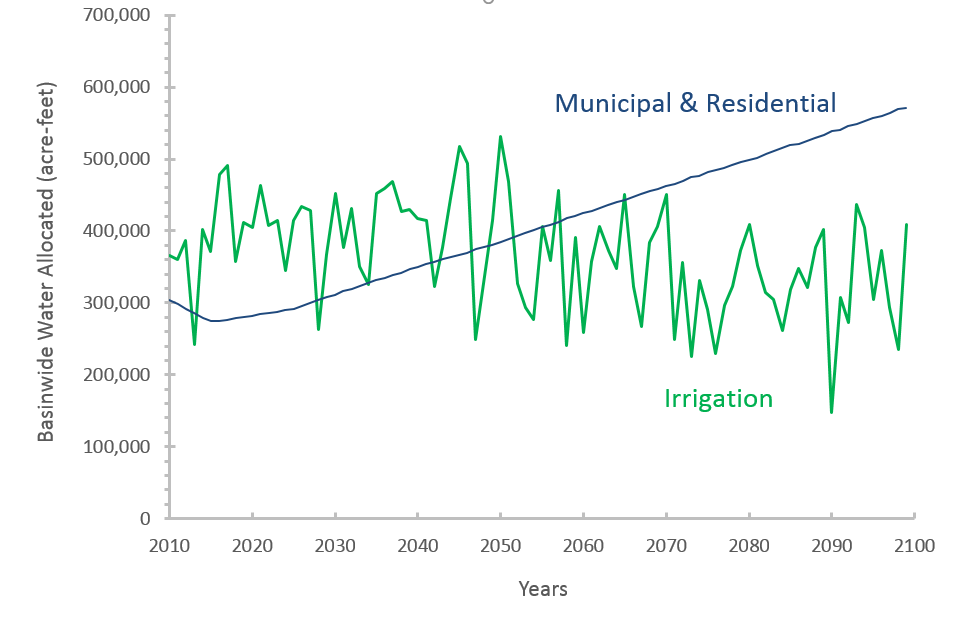 The graph above shows water allocated basinwide for human out-of-stream water uses for the WW2100 Reference Case scenario. This scenario included mid-range assumptions about climate change, population, and income growth, and assumes management practices, policies and institutions continue in their present form. Additional WW2100 scenarios explored the sensitivity of these projections to different model settings and policy choices. Read more about WW2100 water demand modeling on the Urban Water Use and Agricultural Land & Water Use pages.

Changes in prices or other factors that might reduce urban water demand, or lead to changes in the level of agricultural water use, would have relatively small effects on basin-wide water availability compared to changes in the laws and regulations governing instream water requirements. Environmental requirements may limit access to stored water from the federal reservoir system. Policies and management strategies need to adapt to these complex and connected challenges.

The 13 federal dams on the Willamette River provide the biggest single mechanism to mitigate water scarcity over the next 90 years; however, with a growing population the importance of the reservoirs for winter flood risk reduction will also rise. Reservoir management will likely need to adapt to changes in seasonal flows and competing downstream water needs. 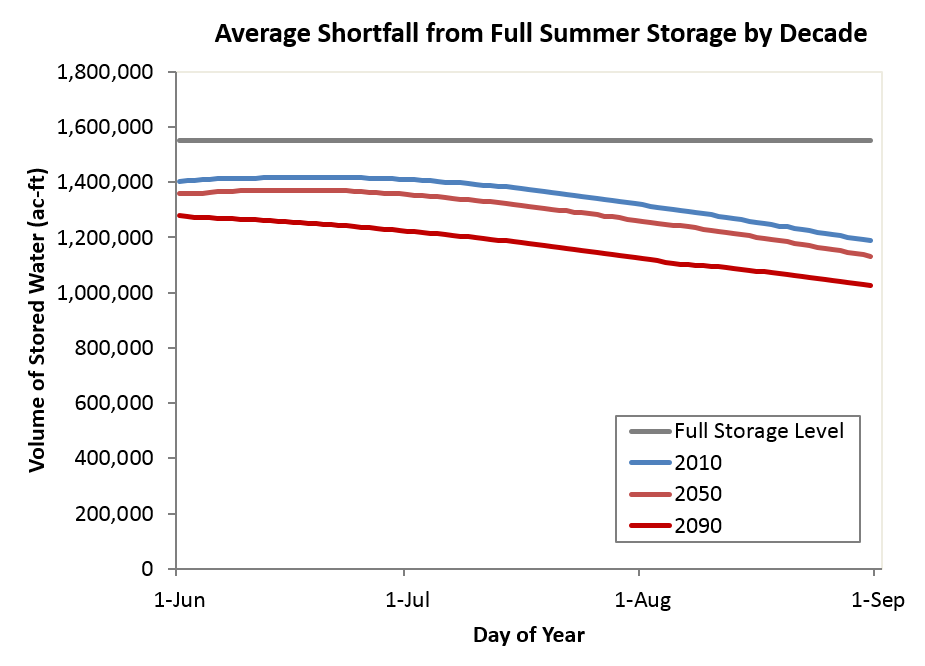 Although the reservoirs were primarily built for flood regulation, they also provide capacity – a combined 1.6 million acre-feet – to store water from abundant winter and spring streamflows for possible use during the summer, when natural flows are low. While flood reduction remains the priority objective of the reservoirs, stored water uses have become increasingly important. Our modeling results indicate increasing shortfalls from full storage at the beginning of summer over time, particularly under warmer climate scenarios, as well as greater summer drawdowns as obligations to release water downstream for conservation flows or contracted stored water are increasingly unmet by natural inflow. Read more about reservoir modeling on the Reservoir Operations and Reservoir Economics pages. 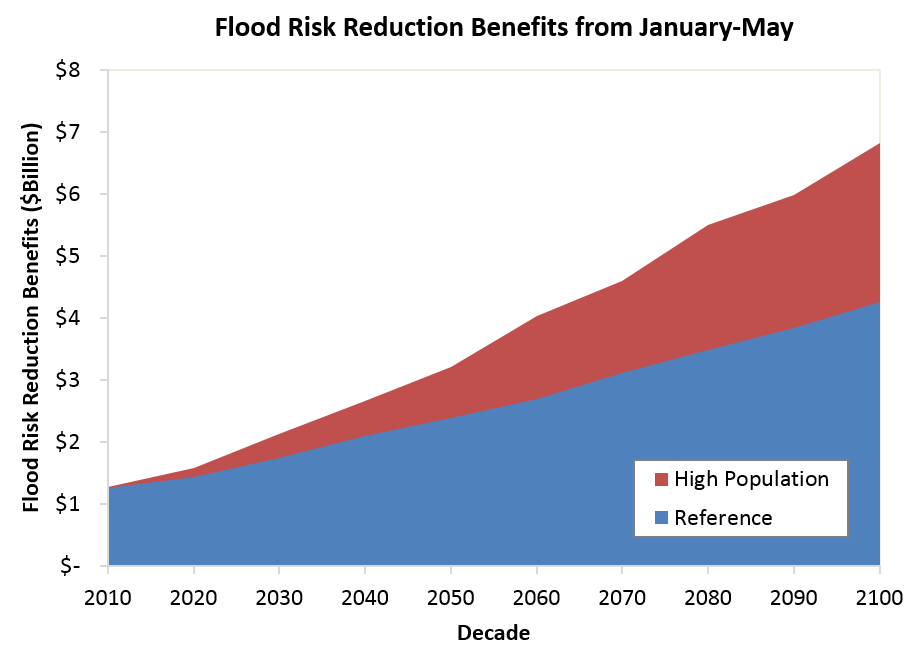 We do not have modeled estimates of water temperature for 2100, but we projected the consequence of a potential temperature change on the likelihood of capturing representative fish species in our standard field sampling protocol. The graphs above show the longitudinal pattern of the likelihood of capturing different fish species with a standard sampling protocol based on 1) the river temperatures in observed in 2012 and 2013 (green and red lines, respectively) and 2) river temperatures in 2100 if they increase by 2°C compared to the 2012 and 2013 thermal patterns (blue line). Read more about WW2100 fisheries analysis on the Fish & Stream Temperature page.

The federal reservoirs and the storage they provide can play an important role in buffering the effects of climate change in the basin. While flood reduction remains the priority objective of the reservoirs, stored water uses have become increasingly important. Management of those reservoirs and allocation of water behind the dams could become a source of conflict in the future. In addition, any impacts of climate change in areas above the dams (such as the after-effects of wildfires) that could impair dam operations or storage could have significant impact on water scarcity in the valley.

Water scarcity will not occur uniformly across the basin. The tributary basins may respond to climate change, population, and income growth differently depending on local differences in both human and natural dynamics.

Change in summer hydrologic drought for Willamette River tributary basins over the 90 years simulated for the Reference Case scenario. Each plot corresponds to the underlying tributary basin and shows changes in the number of drought days determined for each year of the simulation. The grey shaded area indicates the range of estimates for different modeling scenarios. The red and blue line indicates results for the Reference Case scenario. In several of the sub-basins draining the Cascades, hydrologic drought increases over the century in the more extreme scenarios (show in grey shading). However, in the sub-basins draining the Coast Range, hydrologic drought does not increase as much. The difference between these trends is probably due to the Cascades losing snow over the century, while the Coast Range has not historically had much snow. Consequently, the loss of snow generates more frequent summer drought in these sub-basins. One day of hydrologic drought is defined as a day in which the 30-day running mean discharge is below the 10th percentile of 30-day mean discharges. The water years 2019 and 2020 are two of the lowest-precipitation years in the simulated Reference Case scenario, and so the early century shows significant drought. This particular drought is due to randomness and not climate change.

While the WRB overall may see relatively small changes in scarcity, some sub-basins may experience significant increases in scarcity, especially those without water storage in the form of snowpack, groundwater, or reservoirs. The Willamette Envision model provides a tool to help quantify the system response to potential management strategies that can help facilitate mitigation and adaptation where it may be needed most.

By providing a forum for learning and fostering relationships between water managers, the project helped build capacity in the basin to address future water scarcity.

Motivations of participants in the the Learning and Action Network, based on a survey described in Ferguson et. al. (2016). Read more about the WW2100 stakeholder involvement process and surveys and interviews with participants on the Stakeholder Engagement page.

The Willamette River Basin has an engaged stakeholder community, with scientists, citizens, and resource managers willing to work together and plan for water scarcity.

‹ Scenarios up Analysis by Topic › Key to the WW2100 project is the concept of water scarcity. Water scarcity is more than just the case where demands exceed supply. Water scarcity can be understood to reflect the cost of acquiring additional water (e.g., cost of storing and transporting water), or the cost of changing the quality of water (e.g., level of contamination or pollution and water temperature). Water scarcity varies greatly at different times, and across locations. Scarcity occurs on a seasonal basis with peak demand in the dry summer even while annual supply may seem abundant. Water scarcity also has a spatial component with local scarcity depending on available water rights, regulatory flows, and the cost of irrigation or municipal infrastructure to transport water.

This project considered all of these dimensions of water scarcity. For a more complete discussion of the concept of water scarcity, refer to Jaeger et. al. (2013) a research paper developed by members of the WW2100 project team.