Established in 1812, the federal General Land Office (GLO) was charged with surveying public lands belonging to the federal government, and then conveying these lands to state or private ownership. Land surveyors, under contract with GLO, were required to follow specific survey instructions. These methods were developed first for Ohio in 1785, and refined over the decades as federal land surveys progressed westward to the Pacific Coast. The surveys created the familiar rectangular grid of townships and ranges, now called the Public Land Survey System (PLSS), that covers 30 states. In 1946, the GLO was merged with the U.S. Department of the Interior's Grazing Service to form the Bureau of Land Management (BLM).

The GLO surveys created a more or less consistent dataset spanning 200 years and covering nearly 1.5 billion acres. Since the 1920s, ecologists, historians, and others have used GLO records as a source of information on landscape condition and settlement as seen at the time of survey:

The landscape described in GLO notes has often erroneously been called "presettlement," implying pristine ecosystems untouched by human hands, but in most places surveyors saw lands shaped by at least 10,000 years of occupation and management by native peoples.

When trees were available in the landscape, GLO survey instructions called for two witness trees at quarter corners and at river crossings ("meander posts"), and four witness trees at section corners. When survey crews established corners, they marked them with wooden posts, rocks, or pits and mounds of soil. They then recorded compass bearings and distances to selected witness trees, and recorded the species and diameters of the trees. On each tree they cut away a patch of bark, and scribed the wood beneath with the appropriate township and range number.

Species of trees were often selected subjectively for durability, their known resistance to decay. This was done to ensure that the marked "witness" to the established survey corner would last as long as possible. In durable trees, the scribed area would heal over, leaving a scar ("cat face") on the trunk. These scars are often used to relocate survey corners, and the bark can be cut away to reveal the preserved scribe marks beneath (see photos below).

Witness tree selection is one element of uncertainty when reconstructing historical vegetation based on GLO data. Surveyors probably selected trees for a variety of reasons, including the species' durability, its ease of scribing, or simply because it was within easy reach. Therefore, ecologists cannot be certain that the species selected, its diameter, or its distance from the corner reflected characteristics of the stand of trees as a whole at the time of survey. Using witness tree data, species recorded along the section line, and species recorded in the "general description" recorded at the end of each section line, ecologists can make general inferences about stand composition and structure. However, an element of uncertainty remains and is an inherent part of working with historical data. 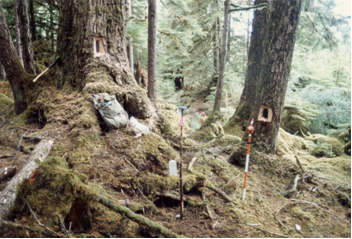 Relocation of a corner established in 1884. Corner cap is at the base of the pole in the center foreground. Two witness trees are in the background, their scars opened to reveal the scribed marks beneath.
Photo courtesy of Larry Marshik, Marshik & Associates. 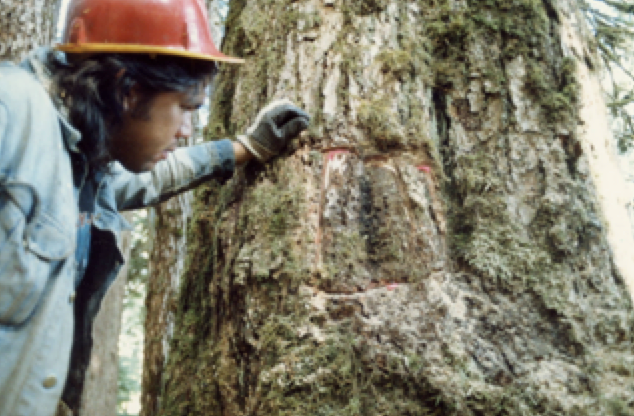 Scar or "cat face" on a witness tree established in 1884, prior to removal of the bark. Photo courtesy of Larry Marshik, Marshik & Associate 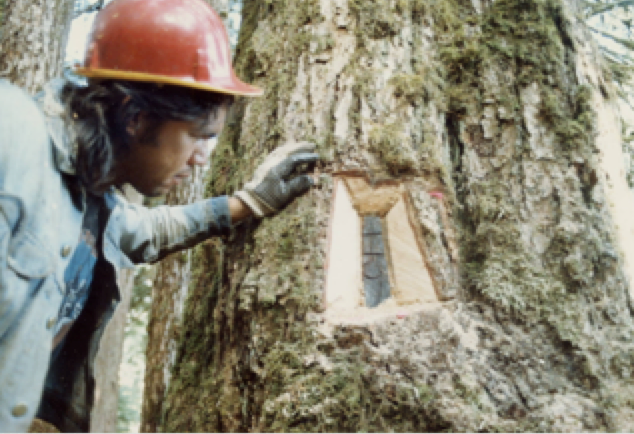 Witness tree with scar cut away, revealing scribe marks made when corner was established in 1884. Photo courtesy of Larry Marshik, Marshik & Associates.

Canada's Dominion Land Survey System (DLS) is the standard government survey system used from Manitoba west to British Columbia. Begun in 1871, it was based on American GLO/PLSS methodology. The two survey grids adjoin along the international border. Although there are some differences (courtesy Province of Saskatchewan) between the two systems, the DLS will be instantly recognizable to those familiar with GLO surveys. Much of the discussion on these web pages can also be applied to the DLS.